"The great majority of people in the world are living at middle-income levels." Rosling

I am reading a book called “Factfulness” by Hans Rosling. It is about the misconceptions held by many people on Earth about the present state of the world. Apparently most of us have a world-view that is 50 years old. It is so important to decision-making, both personally and politically that we know the current facts about our world. In a recent trip to Scotland I was able to see the changes of the last 50 years for myself.

In 1968, I went to the United Kingdom for the first time. I endured cheese sandwiches that tasted like cardboard, toilet tissue with the texture of waxed paper, questionable public toilet facilities and saw many Britons with poor teeth. In 2018, I was aware of how prosperous Scotland has become. Tasty meals, soft toilet tissue, cleans and new public toilets, healthy, well looked after and very friendly people were evidence of the changes.

Happily these changes are widespread in the world according to Rosling, with the great majority of people living at middle-income levels.

Scotland is a beautiful country with traditions that both Scott and I enjoy. We counted it a privilege to travel on tour with the Pipes and Drums of Canada. While based in Edinburgh, we travelled to various places where the band paraded and, of course, we went to the renowned Edinburgh Tattoo. It can only be described in superlatives! Here are some of the places we visited while on tour.

By The Way: Travelling is enlightening because it lets you see the conditions in a country first-hand when you mingle with the local people.

Posted by Jan and Scott OntheMove at 07:38 No comments:

New Book Post #5 "The attitude of the President Trump to immigrants is an echo of the past."

In 1798, President John Adams’ nephew and personal secretary maintained that the cause of their difficulties in the country was attributable to the many foreigners immigrating to the United States.

The attitude of the president to immigrants is an echo of the past. Today it is Muslims and Central Americans that are being blamed for the county’s difficulties. They were banned from entering the country or recently jailed and separated from their children.

The authors of the First Amendment were aware of the risks to which human institutions are prone. They knew “that it was hazardous to discourage thought, hope and imagination; that fear breeds repression; that hate menaces stable government; that the path to safety lies in the opportunity to discuss freely supposed grievances and proposed remedies; and that a fitting remedy for evil counsels is good ones.”* The free press is necessary to bring facts to light so that discussion can proceed based on knowledge not opinions.  For example, between 2006 and 2015, the New American Economy Research Fund reports that of the 10 cities with the largest influx of refugees, only one showed an increase in the crime rate, all the others decreased, some by more that 50%.

By the Way: Today, the mainstream belief among scientists is that race is a social construct without biological meaning.** This means we are all members of the Human race.

The First Amendment in the Unites States’ Bill of Rights guarantees freedom of the press. Justice Stewart said that because of the role the press plays in keeping the public informed…the press is constitutionally entitled to government “sensitivity”.

But President Trump has called the press “our country’s biggest enemy”.

This point of view harks back to 1798, when President John Adams was the leader of the Federalist Party. He and its members believed that their political party was the government because once the people elected them there should be no criticism. In fact by electing them, the people had passed all decision-making powers to the party in power. The Federalists passed the Alien and Seditions Acts, which were designed to overpower dissenters, ensure conformity and get rid of foreigners. Many people were arrested for sedition, including newspaper writers and editors. When found guilty, they would be jailed and fined up to $5000.

By the Way: When Thomas Jefferson was elected president in 1800, by a wide margin, the Alien and Seditions Acts were repealed.

Posted by Jan and Scott OntheMove at 11:38 No comments:


The policy of separating immigrant children from their parents is most disturbing.
Even though this policy was abandoned by Executive order on June 20, there was no provision in place to reunite the affected families. In the US, more than 2,000 children remain separated from their parents as of July 5, 2018. The National Public Radio reported on June 15, that the American Academy of Pediatricians says separating children from their parents can cause trauma severe enough to limit brain development. They condemned the policy as “government sanctioned child abuse”, according to the Globe and Mail editorial of June 19, 2018.

As in my last blog, I looked for historical precedence for this particular behaviour.
I found a possible explanation in the response to the slave trade in research by Du Bois. When the slave trade was of least financial advantage in 1774 and 1804, it might have been possible to exert moral persuasion to eliminate it, but, “A fatal spirit of temporizing, however, seized the nation at these points; and although the slave-trade was, largely for political reasons, forbidden, slavery was left untouched. Beyond this point, as years rolled by, it was found well-nigh impossible to rouse the moral sense of the nation. Even in the matter of enforcing its own laws and co-operating with the civilized world, a lethargy seized the country.” (The Project Gutenberg EBook of The Suppression of the African Slave Trade to the United States of America, by W. E. B. Du Bois)

By the Way: I wonder if this is what President Trump and Kelly, his Chief of Staff, were banking on when planning this policy, that the moral sense of the nation is asleep.

Posted by Jan and Scott OntheMove at 11:50 No comments:

NEW BOOK #2 - SEPARATING FAMILIES A THROWBACK TO THE 17th CENTURY


Different Strokes: Answers to the Perplexing Differences Between Americans and Canadians is the product of the theory, investigation and subsequent proof. The answers emerge from the beginnings of each country. Knowing this helps to explain what we see and read in current events.

It is shocking to see children separated from their parents now, when we know how damaging and traumatic it can be in the long run.  Indigenous people in Canada and the Canadian government are still dealing with the emotional fallout from First Nation, Inuit and Métis children sent to residential schools.

In America the separation of children from their parents was a regular occurrence during the era of slavery. The Slavery Code of 1698 in the southern states was a carry over from the one in Barbados, where the American southern planters originated. It was the most brutal slavery code at the time.  This punitive code was not universal; slave owners in Virginia were much more humane in their dealings with their slaves.

Punishment has also been a common theme in America. When the republic was formed in 1776, anyone who was not with the republic was considered a traitor. Land was confiscated and Loyalists were persecuted. That is why 50,000 Loyalists left to go to England, the Caribbean Islands and the majority to Canada.

Steve Schmidt, a Republican strategist, resigned from his position because of the child-separation policy. (Mason, Gary, The Warning…Op Ed column, Globe and Mail, June 22/18) Schmidt compared this policy to some of the worst abuses to humanity in the country’s history. “It is connected by the same evil that separated families during slavery and dislocated tribes and broke Native American families.”

Now there is a president in America who is impulsive, demeans people from Mexico and other Central American countries, plays to his base and has no concern for the chaos he is causing in their lives. He is carrying on some of the most inhumane actions perpetrated in the past in America.

By the Way: There has been a huge outcry against his actions because the majority of Americans has moved on from that inhumane behaviour or would never have acted that way in the first place.

Posted by Jan and Scott OntheMove at 07:25 No comments:

After writing four books about Canadian explorers, the Explorer Chronicles Series consisting of Samuel de Champlain (Eng. And Fr.); The Vikings, Cabot and Cartier; Explorers of the Pacific Northwest and La Salle and The Rise of New France, and reading scads of research material, I have been thinking about what I have learned.

People travel, people are curious, people are drawn by novelty, and people want to make money by trading their goods for other goods of value. These desires drove the explorers to find new places and it drove their sponsors to invest in their travels.

Being a curious person myself, I started to ask questions about my country, Canada, and our nearest neighbour, United States of America. Why are we characterized so differently? Why are we so different in character?

Having been trained in university in science, I ask questions and I want answers. But first my job in answering my question is to have a theory. The answer is in the beginnings of each country.

The book I am writing now is the product of the theory, investigation and subsequent proof.

By the Way: the new book is titled, Different Strokes: Answers to the Perplexing Differences Between Americans and Canadians
.

Posted by Jan and Scott OntheMove at 08:15 No comments:

A Sunday in the Country

We decided to take a Sunday drive on the back roads of Oxford and Norfolk Counties. Having lived in Woodstock for only four years, so we're still looking for interesting places to go. We headed south to Port Dover on Lake Erie. David's had been recommended for lunch. What a beautiful view to go along with and excellent lunch. 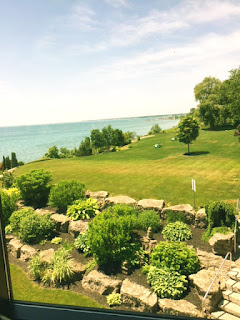 Wine tasting came next on our list. Burning Kiln Vineyard near Turkey Point was the destination.
The land was originally used to grow tobacco, but now is covered with grape vines. 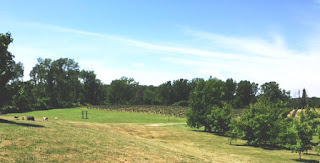 There was a patio with bright red umbrellas and the food was supplied by David's! Who knew?
We've filed that info away for a later date to come with friends for lunch with good wines and music on the patio some Sunday later in the summer.

By the Way: the weather was superb and the drive proved to be another great adventure.
Posted by Jan and Scott OntheMove at 08:35 No comments:

Jan and Scott OntheMove
I am a writer, author of 4 history books about Canadian explorers and business analysis reports about towns and villages in Ontario. I believe that in any form of writing the story is what attracts the reader and connects that reader to the personalities, actions and events described in the story. A most satisfying experience for an individual is connecting: emotionally, physically and spiritually. Join us, Jan and Scott OntheMove - Bon Voyage